8.9 Million People Have Relocated Since the Start of the Covid-19 Pandemic

2020 will go down in history for a pandemic that changed the world. No one would ever have imagined last year that we would stay home for social distancing in order to help save lives. Specifically, one in three adults substituted some or all of their typical in-person work for telework compared to 1 in 20 adults that worked remotely before the pandemic. With teleworking at record high levels, people also decide to move for various reasons. Some of them seek out bigger houses with bigger yards for their kids to play in and office space for them to work. Others seek more affordable homes in less dense places away from large city centers since they can telework.

While teleworking may continue long after the pandemic, it is obvious that far fewer people are moving for job-related reasons during the pandemic than they used to do pre-pandemic.

To better understand the COVID-19 impact on U.S. mobility, we collected United States Postal Service® change-of-address data from March to October 2020 for each county across the United States. Since people who want to forward their mail from their old home to new residences file a change of address request to the USPS®, this dataset serves as a good proxy on how many people moved since the beginning of the pandemic.

As of October, 8.93 million people relocated since the pandemic started. This is an increase of nearly 94,000 people changing the address of their residence compared to 8.84 million in 2019 during the same period (March through October). Breaking down the data by month, most moves during the pandemic occurred in March, with 1.23 million people relocating compared to 1.00 million a year earlier.

Taking the analysis one step further, we tracked the location of these movers at state and county level. First of all, at the state level, after comparing inflows and outflows for the period of March to October 2020, 34 states experienced net migration gains across the country. This means that these states had more people moving in to the state compared to those who moved out. Although interstate migration accounts for less than one-fifth of all moves, this type of move is worth considering because of its important implications for regional demographics and economic change.

New Jersey, South Carolina and Maryland were the winners with the highest migration gains across the country. Specifically, in New Jersey, 2,032 more people moved in to the state compared to those who left. In contrast, New York, Texas and the District of Columbia were the states losing the most people during the pandemic. In New York, 2,847 more people moved out from the state compared to those who moved in. However, keep in mind that the data is not a full year comparison. A 12-month comparison will be a better read about the true migratory trends. For example, we know that Texas always draw more new residents to the state every year, but the period covered is over several hot summer months where Texans may go elsewhere to escape the heat, and therefore shows a net negative trend in the data set. 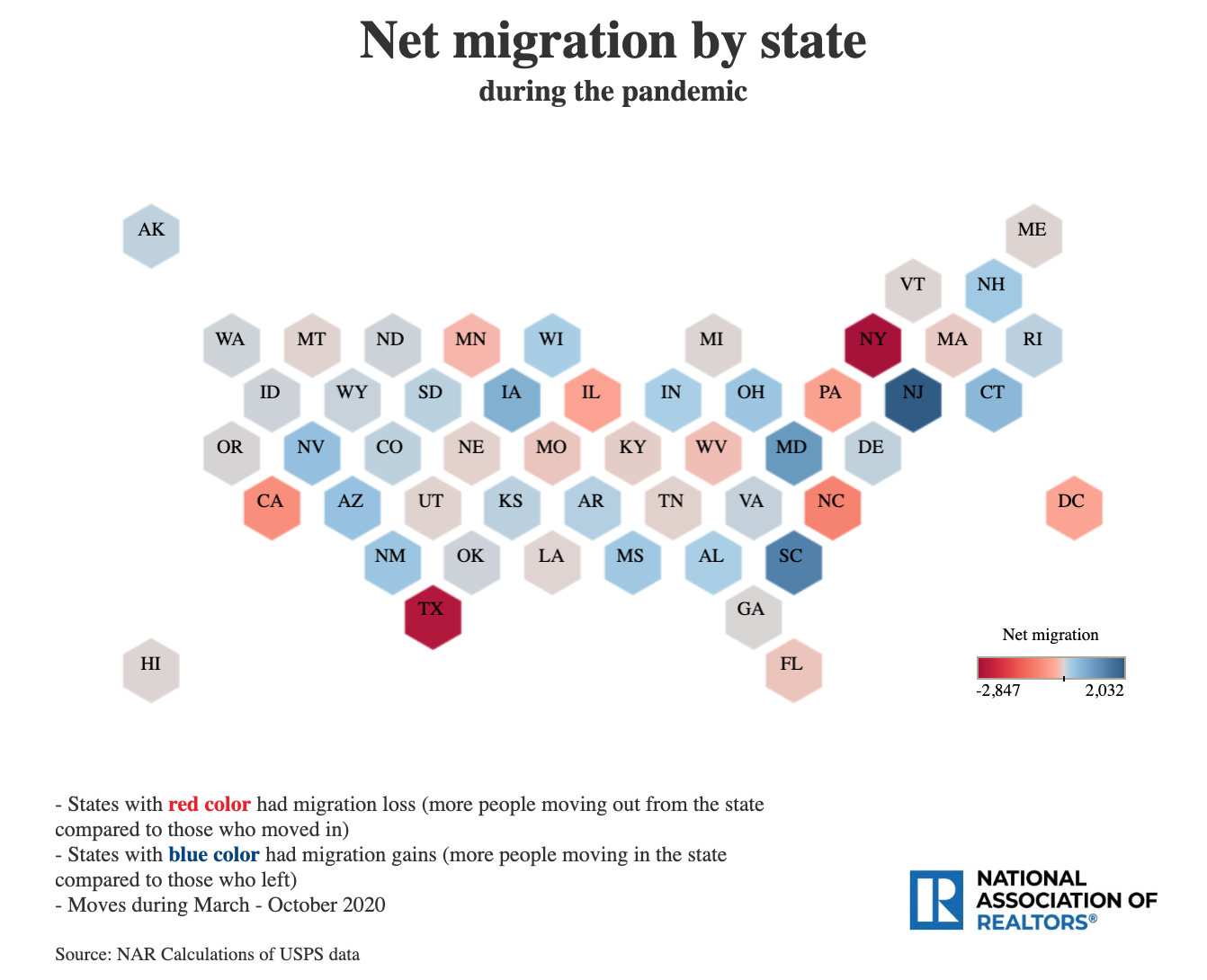 Compare net moves between 2020 and 2019 for the top 10 states with the highest gains/losses during the pandemic: 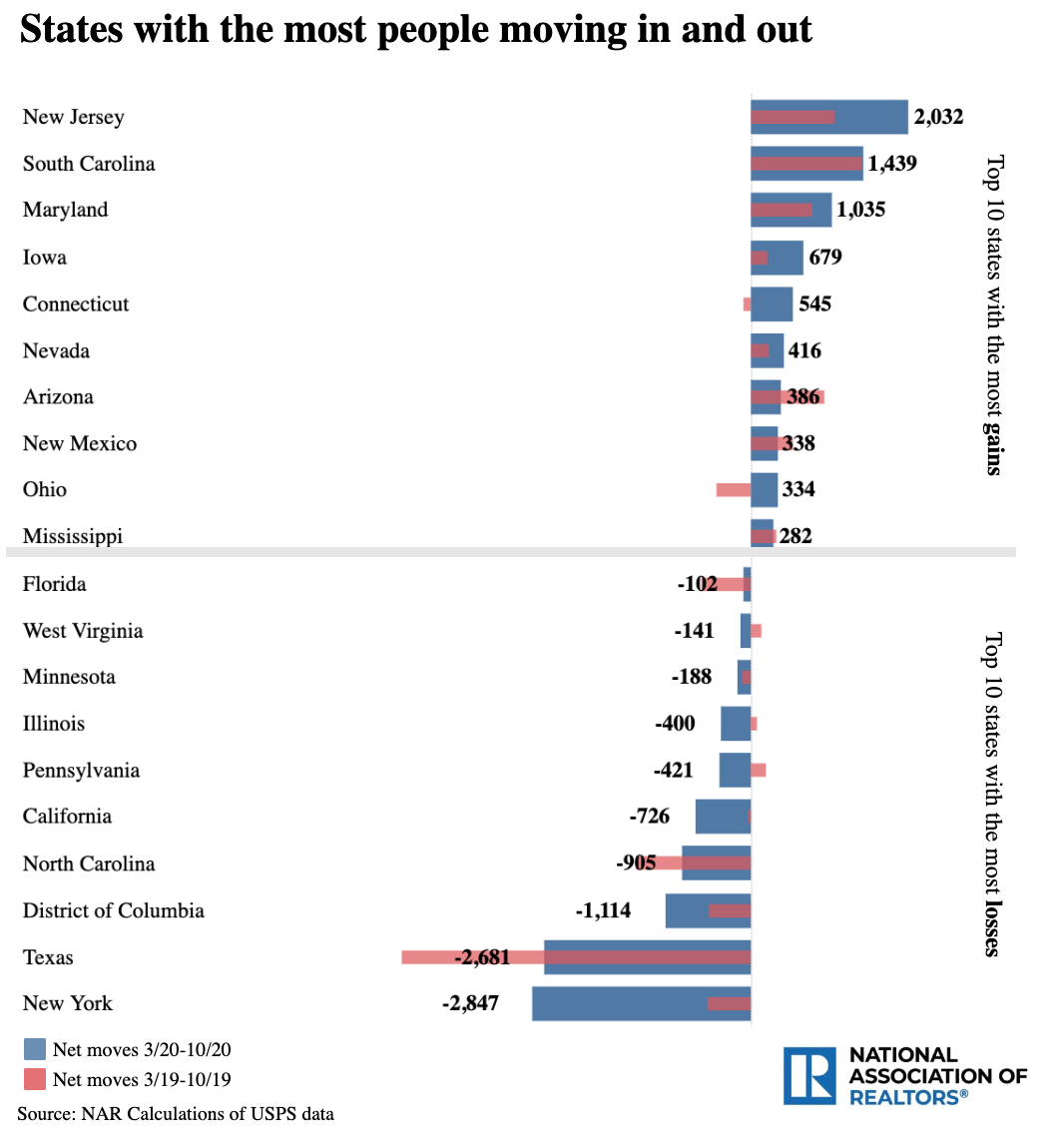 While Texas and New York had the highest moving rates, the chart below shows where most of these movers relocated during the pandemic. For instance, more than 50% of those who left New York moved to New Jersey followed by Connecticut (12%). Respectively, the top three destinations for Texans during the pandemic were Arkansas (16%), Florida (13%) and New Mexico (9%).

According to USPS data, large cities lost the most people during the first seven months of the pandemic. Specifically, we see people moving out of some of the country’s most popular areas and relocating to the suburbs. This means that most people moved close their home. For instance, most New Yorkers moved to Brooklyn (33%), Hamptons (29%) and Jersey City (8%). Respectively, most San Franciscans moved to a county in a radius of less than 60 miles away from their previous home.

As a result, counties near big cities are experiencing the most migration gains. For instance, Williamson County in Texas was the county with the highest migration gains across the country. While Williamson County is also one of the most conveniently located suburbs in Austin, nearly 4,000 more people moved in the county compared to those who moved out. Specifically, nearly 6,100 people moved in Williamson County, TX while about 2,250 people left from the county. Another example is Suffolk County in New York, which gained nearly 3,400 people during the pandemic. In contrast, New York County in New York, Travis, Harris and Dallas Counties in Texas lost the most people.

See the top 10 counties with the highest migration gains/losses during the pandemic:

See the origin and destination of movers for each county across the country:

There are very promising new developments on the COVID-19 vaccine, with vaccine distribution starting in the next couple of weeks. However, experts do not predict that we’ll return to our pre-pandemic sense of normal until late 2021. In the meantime, many large companies have already announced that employees can work remotely long-term even after the pandemic. Thus, expect similar migration patterns for the first six months of 2021 and even longer with suburbs and smaller cities gaining more population.

Nadia Evangelou is a Research Economist for the National Association of REALTORS®. 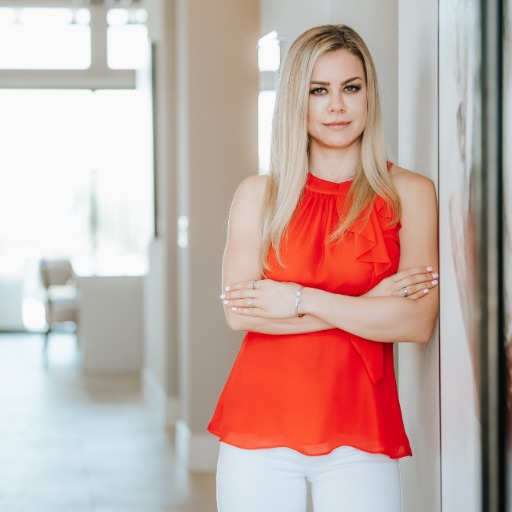 As a Las Vegas native, I witnessed its great transformation – from a desolate desert into a bustling metropolitan city that retains its small-town feel. My intimate knowledge of this region, and my ....

How To Build Wealth Fast

Are you looking to increase your net worth and build wealth quickly? Here are a few ways people have successfully retired early so they can enjoy everything life has to offer with no strings!

How Much Does My House Remodel Project Really Cost?

You are searching for the perfect home, you find one that you LOVE.  The layout feels like home, but it has ugly carpet and tile counter tops.In this market you can’t wait, you have to

8.9 Million People Have Relocated Since the Start of the Covid-19 Pandemic

2020 will go down in history for a pandemic that changed the world. No one would ever have imagined last year that we would stay home for social distancing in order to help save lives. Specifically,

Why It’s Important to Price Your House Right Today

Why It’s Important to Price Your House Right TodayEven in today’s sellers’ market, setting the right price for your house is one of the most valuable things you can do.

By registering, you agree to our terms of use and that real estate professionals from Winning Realty and lenders may call/text you about your inquiry, which may involve use of automated means and prerecorded/artificial voices. Message frequency varies. Text HELP for help or STOP to cancel. You don't need to consent as a condition of buying any property, goods or services. Messages/data rates may apply. Additional information about data use is in our privacy policy.